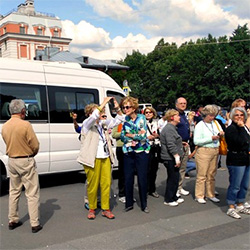 Minibus hire
Our fleet of minibuses range from 4 to 24 passenger vehicles. Our larger minibuses are fitted with free WiFi and power outlets, plenty of room for luggage and ample leg room so you can sit back, relax and enjoy your journey in maximum comfort.

Call our customer services team on the number below to speak to one of our advisors who will help you with all of your needs. 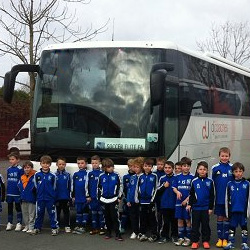 Burj Khalifa
The Burj Khalifa is Dubai’s landmark attraction standing at an impressive 829.9 m, making it the world’s tallest building. Make your way to the observation deck on the 124th floor to see incredible panoramic views across the whole city. As part of the experience you’ll find multimedia presentations on the Burj Khalifa and the city itself. After the information session, you’ll be whisked up to the observation deck by a high-speed lift where you’ll be met by those sweeping birds’ eye views across the city. If you want to beat the queues, it’s recommended that you buy your entrance tickets in advance. This is definitely something to think about on the weekends when it’s especially busy. For a different experience head there at night and see the building illuminated.

Burj Al-Arab
The Burj Al-Arab is the world’s tallest hotel standing at an impressive 321 m. It’s perched on its own man-made island nestled on the Dubai coastline. As well as being the tallest it’s also one of the most expensive hotels. A night in one of the Burj’s most luxurious suites will set you back an eye watering £7000. The most cost effective way of experiencing the opulence of the Burj Al-Arab is to go for dinner at the underwater Al-Mahara restaurant. The restaurant is decked out with glass panels on the floor and ceiling which means you can view the exotic sea life below. If dining with the fish doesn’t appeal you can always book in for some tasty afternoon tea at the Skyview Bar instead.

Dubai Mall
The Dubai Mall is the city’s premier shopping destination and unofficial entrance to the Burj Khalifa and the Dubai Aquarium. As well as a series of stores, inside the Dubai Mall you’ll find a cinema, games as well as an ice-skating rink so you won’t be at a loss for things to do. There’s also countless restaurants and even the occasional fashion show and bit of live music to get your head nodding. Some famous events and festivals also take place at the Dubai Mall including the Dubai Shopping Festival at the start of the year and when the summer months hit you’ll be treated to the Dubai Summer Surprises Festival. 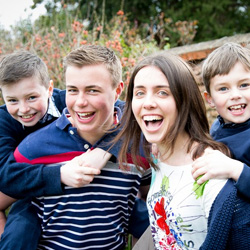 Jumeirah Mosque
The Jumeirah Mosque is considered to be the most elegant of all the mosques in the city. The mosque is essentially an exact replica of the Al-Azhar Mosque in Cairo and is a brilliant example of traditional Islamic architecture. Built in the medieval Fatimid tradition, the mosque is fashioned with two minarets with some finely detailed stonework.

Dubai Aquarium
The Dubai Aquarium is home to around 140 species of sea life that you can marvel at through the massive suspended tank located on the ground floor of the Dubai Mall. For an even closer look at life under the sea, why not take a glass bottom boat tour? If you’re brave enough you can even go cage snorkeling or shark diving!

Jumeirah Beach
Jumeirah beach is Dubai’s most popular strip of sandy white bliss. The beach is lined with hotels and boasts excellent facilities including restaurants to grab a bite, sun loungers to relax on as well as water sports operators to get you out onto the waters on a jet ski. Make the most of your time with a visit to the nearby Majlis Ghorfat Um Al-Sheef which was once the summer residence of the late Sheikh Rashid bin Saeed al-Maktoum. The residence, built in 1955 is constructed from blocks of coral and gypsum and whilst it has been restored over the years, it has still kept hold of its original opulence and stunning decor. It provides the perfect focal point to gain a sense of the lavish lifestyles of Dubai’s wealthy rulers.

See what our customers are saying

"We have been using Dubai Minibus Hire now for over 3 years and they have never let us down and always provide a first class service to our business."- Jason Hargreaves